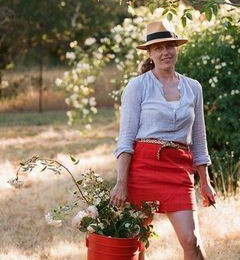 Q: How did you get into floral design?

A: I was at UMass studying classical voice, and I was home on break. I observed
[celebrated Berkshire floral designer] Pamela Hardcastle’s studio prepping for a wedding.
The flowers were so refined, nicer than any flower shop. Her environment was so
beautiful—plants, flowers, and everything that goes along with them. And then at around
the same time I worked as a teenager for Barbara [Bockbrader, Campo co-owner] in her
various capacities as gardener and arranger, and she would plunk her little kids down on a
blanket at [local historic home and hotel] Blantyre and go to work in the gardens. I saw
you could work in a beautiful medium, have kids, and be near them. And when I realized
that the wedding industry makes this career financially possible, I had one of those
instant realizations: this totally attracts me and I can do it.
I have to give credit, too, to my mother—Famke Zonneveld. Everything she touched was
an extension of her creative self. It rubbed off.

Q: Do you remember the first thing you made that you liked?

A: When I was about 18 I made a dried flower wreath. It took me about 10 hours. It sold
for $350. That floored me. So I took a bunch of paperwhites and wreathes to New York
and sold them on the street, with some moss. That led to my selling them in stores. Then I
began working for [famed floral designer] Robert Isabel.

Q: Then what happened?

A: I went to California, because I was attracted by the possibilities of working with
locally grown material, and it seemed like a lot of interesting elements—vines, fruited
branches—were coming out of Northern California. Also, I had a boyfriend there. I
started working for another florist in San Francisco. And I was working at Crate &
Barrel, for the paycheck. Then I did a friend’s wedding, Dr. Sara Gottfried. I had
presented her with a bouquet for some event, and she liked it so much she cancelled the
florist she had already booked for her wedding and hired me instead. I worked SO hard
on that wedding, and I did it all myself. Barely slept, agonized over every last detail. Her
wedding coordinator was incredibly difficult and I worked really hard at remaining
centered and pleasant. At the end of the wedding, the coordinator said to me, “I have
been a total bitch to you this entire time. And you handled me really well. I’m going to
recommend you to everyone.” And that was when my business began.

Q: If you are known for a style, what is it?

A: When I moved out to California, East Coast style was pretty tight, and French. In
California there was a more natural aesthetic—Chez Panisse had started the local organic
food movement, and the flowers in the restaurant were also locally foraged and kind of
loose, and wild. It was the best representation of California style and it attracted me
immediately. My work is known for that quality, which was influenced first by Pamela
and Barbara, and then by that breezier West Coast feeling. The timing was just right.
I also had a friend who worked at Chronicle Books and they approached me about doing
a book. So that was my first book, Flowers for the Table. Which brought me to Martha
[Stewart]’s attention, and Town & Country’s, and other magazines. The book, and the
stories I worked on at the magazines, sort of made my name synonymous with that
wilder, more organic look.

Q: You work in the wedding industry. Can you tell us a funny story?

Q: What gets you excited these days?

A: I really love teaching. This is something that I’ve discovered. The workshops I teach
are so rewarding. And I have a new book coming out, “The Flower Workshop,” next
February, through Tenspeed Press. Oh, and the farm [she bought with husband Chris
Gregory in New York State]. It’s deeply pleasurable to watch my own flowers grow.
~

FORCING, or Making Flowers Happen Inside During Winter
February 9, 2015